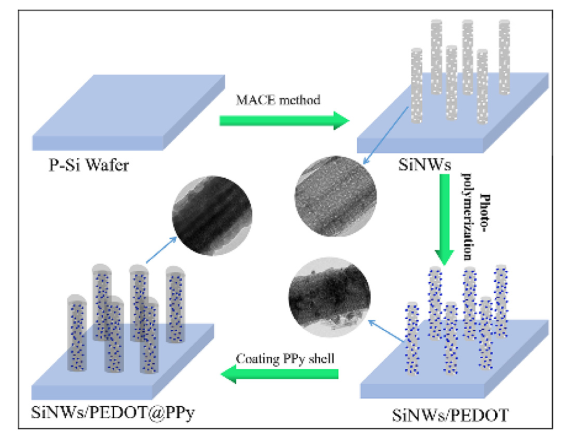 In this study, we synthesized a new silicon-based supercapacitive material of core-shell nanostructure, which is promising to fit the processing of the Si-dominant microelectronics. An in-situ photopolymerization was used to graft poly(3,4-ethylenedioxythiophene) (PEDOT) to the surface of the silicon nanowire arrays (SiNWs) which were prepared by metal-assisted chemical etching. Further, polypyrrole (PPy) nanolayers were loaded as the conformal coating by chemical oxidative polymerization, thus obtaining the core-shell material with PEDOT serving as a bridge over SiNWs and PPy. The interaction between the grown PEDOT and SiNWs in the composite was clearly revealed by X-ray photoelectron spectroscopy. In order optimize the capacitance of the SiNWs/PEDOT@PPy composite electrode, the influence of SiNWs lengths was studied. The results proved that PEDOT as the surface modifier greatly enhanced the supercapacitive performance of the composite material. The as-prepared silicon-based composite electrode delivered an areal specific capacitance as high as 106 mF/cm−2 at the current density of 0.5 mA/cm−2.